Harry Styles celebrated his 19th birthday like any 19 year old boy would love to…with a stripper giving him a lap dance of course. He attended a club in London with his group of friends, including Nick Grimshaw. However, only Niall joined Harry as he partied while Liam and Louis attended Liam’s best friend Andy Samuels’ 21st birthday party. Zayn was at neither. But, this doesn’t show ‘cracks’ in the band like some papers are no doubt going to assume, they don’t have to be with each other 24/7 and it’s time people realised that.

Harry wore a blue shirt covered in love hearts designed by Burberry, which is getting a lot of love today by fans.

Back to the main point which people are speaking about today, is that Harry was accompanied by a stripper at one point during the night – to which he seemed rather awkward, but I bet he was loving it. What teenage boy wouldn’t? 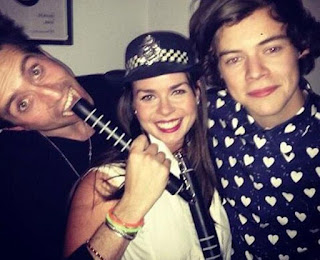 I mean he looks pretty chuffed here.
Friends of Harrys posted photos online for everyone to see of him getting this lap dance, it’s quite funny really and I’m sure you’ll be able to find them somewhere (I’m a family friendly blog, of course…gosh).