Comic Relief has always been a lovely cause, I’ve always supported it. When I was little I would order the fundraising packs and do bits in there to raise a bit of money for the charity. I think giving even a small amount makes a big difference, £2 to us is nothing but £2 to those who really need it means a lot.

Red Nose Day is being held on the 15th March, every year I will watch the event on TV or of course Sports Relief. This year they chose One Direction to do the single and I think that’s the best thing they could’ve done and I’d think so even if I wasn’t a fan. Who could bring in the most money to help the children? The biggest boy band in the world of course. Niall, Zayn and Louis visited a hospital in Africa where they saw many sick children and they made an appeal video stressing how important it is that we help these children get immunised from awful illnesses. A vaccination costs £5, what would we do with £5? Buy some food? Buy something extremely pointless? Or we could save a life – you could do this by texting YES to 70005 or simply visit the Red Nose Day website and donate some money there https://www.rednoseday.com/donate

Also, this year Jessie J will be shaving her (very nice and shiny) hair for Comic Relief. I think it is amazing that celebrities get involved with such great causes, without the power of the media and famous faces we probably wouldn’t actually think about how bad things are in countries facing poverty. It makes me sick to think we live in a world where footballers earn crazy amounts of money and do nothing with it but there are people dying because they lack clean water. That is the sad reality of it all. We live in a world where we buy things without a second thought, maybe next time we should give that money to those who really need it instead of ‘treating’ ourselves. Many people who know me know I like to buy things, who doesn’t? But sometimes I just sit here and feel guilty about the fact I’ve just got myself a new t shirt when I didn’t really need it. I’ve always given money to charities but I want to be in the position when I’m older where I can help these people like the celebrities involved in Comic Relief do.

Buy or download the official Red Nose Day single, One Way Or Another (Teenage Kicks) by One Direction on iTunes or buy the physical copy at Sainsburys, both for £1.99. Even if you don’t like the song (it actually is a really good song) then still buy it purely for the fact that you’ll be helping those in need. 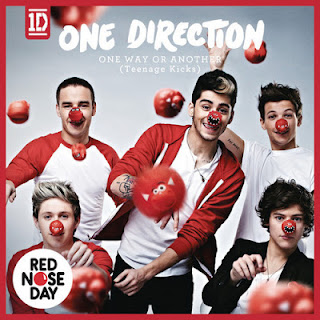