This week hasn’t been the greatest for that Justin Bieber. Usually his trips to the UK seem to be quite pleasant but not this time it seems.

On Monday he started his first of four London O2 Arena shows but as my Twitter feed was blowing up with the topic I went on to find out he was about an hour or so late, although he said on Twitter that he was only 40 minutes. Angry fans and clearly angry parents with grumpy children. He wasn’t the most loved teenager on the planet that night. 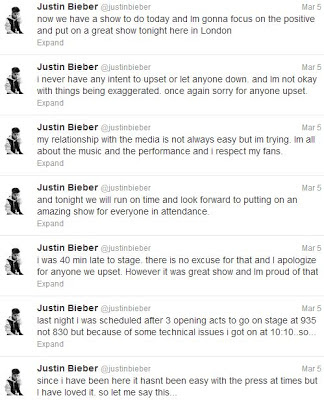 He was getting a lot of bad press because of this and a lot of people saying he needs to get rid of that ego, we don’t know the exact reason why he was late although he says it was technical issues, I’m not sure. He probably put on a good show despite all of that.
His week went on and last night it was said that he had breathing difficulties on stage and had to be taken to a doctor, resulting in leaving the crowd for a while. But like a trooper he came back to please his fans because I’m sure he didn’t want to disappoint them at all. I can’t knock him for doing that, really.
Then today he’s had a little encounter with a Phil Mitchell paparazzi lookalike. Foal mouthed and a typical paparazzi guy – rude. As Justin tried to get to his car, ol’ Phil shouted words like “assault” which clearly angered Justin. He reacted by cursing at this photographer (oh, young fans close your ears…can you close your ears? I don’t know) I honestly don’t blame him, he is followed around all day, every day and it’s only natural for him to lose his rag once in a while.
Let’s hope his next trip to the UK is a little bit better and the rest of the tour goes well.