As I spent Friday evening/Saturday morning at Heathrow airport waiting for 4 of my favourite boys to arrive in the UK (5 Seconds Of Summer) it made me think about how much time and effort I put into bands. I will spend hours on end waiting around for a band and half the time I gain nothing but a wave from it, why do I do it? That’s the question everyone always asks me, well I’m going to tell you why myself and many, many others do things like that!

It’s not about meeting a band to say you’ve met them for me, it’s about being around the people you look up to the most, the people who are there without intending to be when no one else is around! Just to see a band I love makes me super happy and if I can get a picture and have a chat then that’s a massive bonus.

I’ve had many low points, especially this year and I’ve always fallen back onto music, music is SO powerful sometimes people forget just how powerful it can be. I’ll listen to my favourite bands and be happy a little while later and that’s something special.

My friends and some of my family just don’t understand why I do it and I’m sure if you’re like me then your friends and family are the same, but it’s just something I love to do I mean I don’t do it all the time – I don’t have the money or knowledge for that! But when I do I just hope for the best and if the best happens then that’s great, if it doesn’t then it’s a shame but the only thing I can do is try.

This weekend I got pictures with 3/4 of 5 Seconds Of Summer and I really just wanted to have some hugs and a chat with them but unfortunately it was too busy to happen and I could’ve met them earlier in the year when they were less known but again just lack of money, life is tough sometimes haha!

Anyway, if you’re like me and you love a band and will go out of your way to see them then don’t stop just because everyone else thinks you’re a bit weird for doing things like that, if that’s the way you have fun then carry on! I always have a laugh at things like that and most of the time I’ll talk to other people there and everyone just gets along, it’s just nice. 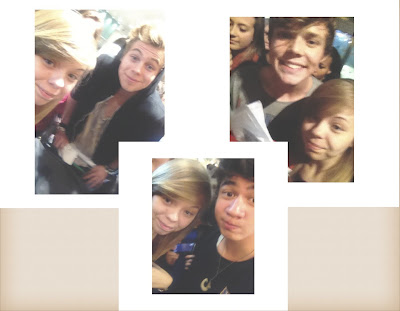