The cute, real life fan-fiction relationship between Jai Brooks and Ariana Grande came to an end a little while ago and with that plenty of drama followed. Rumours? Truth? We don’t know, we can only build opinions from what we’ve seen unfold on Twitter.

So, there was rumours as to why the couple broke up – however, everything seemed sweet, perfect in fact. They had met online after Jai told the world how she was his crush and then it all blossomed from there! Who wouldn’t want that to happen? It’s cute as.  But all of that has just ended in a messy break up.

It would seem Ariana moved on very quick to jump into the arms of The Wanted’s Nathan Sykes after they worked on a song together, although what has come to be known today is that perhaps she was seeing Nathan while she was in a relationship with Jai Brooks. This was brought to our attention in Jai’s emotional twitlonger earlier…

If we purely focus on Jai’s side of the story then it would seem that Ariana isn’t as innocent as she seems and that she may have messed around with Nathan while being in a serious relationship with Jai. Jai’s brothers were not shy of having his back either as they were quite happy to voice their opinions on Ariana over the past few days.

But this is just one side to the story of course, but why would someone make up that the girl they were crazily in love with has cheated on them? Would that really be fair of Jai to do? That’s exactly what Ariana thought as she showed us in her tweets this morning, but could SHE possibly be making up the fact that Jai ‘said’ he would make her ‘look bad to the world’. We just don’t know! 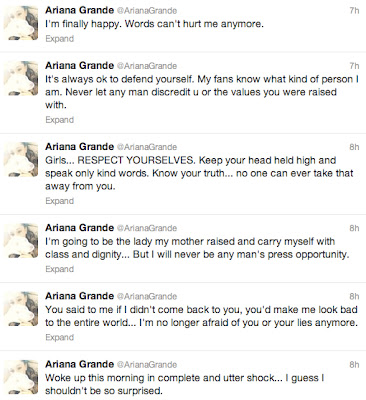 Her boyfriend, Nathan, is yet to have his say on the matter although his group is well known for their twitter bust ups with One Direction. Could he have something to hide?
What are your opinions on the situation? Are you Team Ariana or Team Jai?