Well, Harry has only gone and got himself a new chick in the form of Taylor Swift. I love that girl, she is my girl. She’s the girl I listen to when I’m depressed about boys, I listen to her when I want to pretend I am singing on the bridge at college. She is THE GIRL.

But now she’s the girl that people in the One Direction ‘fandom’ are despising, lets take it back before all this came out, everyone loved her because as I would describe her she is the girl who understands every teenage girls brain. If I like a boy I will literally scream ‘you belong with me’ in my head, thanks to Miss T Swift.
Obviously, it hasn’t been confirmed so we’re all just assuming but as soon as all of these pictures of them in New York together have come out it’s like a world war has begun because a photo is obviously confirmation enough for One Direction fans.
Everyone has their opinions on them, I have opinions on Joey and Lauren Branning on Eastenders and I don’t know them so it’s okay to have opinions! But when people are saying disgusting things aimed towards her, that’s when opinions should be kept to yourselves. Nobody deserves death threats. 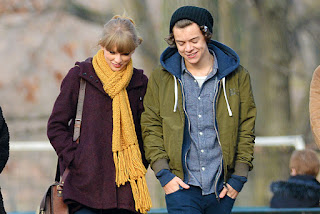 They looked cute together in New York on Sunday (and she had a nice coat on, where is it from? and he always looks great in a beanie) so who are we to judge them? We don’t have the right.
BUT OH NO, THOSE WERE NOT THE LAST WE SAW OF THEM TOGETHER, to add to the stress of all of your poor hearts they were holding hands last night after the Madison Square Garden gig and going back to her hotel it seems. ‘Were the photos photo-shopped or were they genuine?!’ – the questions I saw on my twitter timeline all day. Who cares if they were holding hands (apart from millions) they are human, if they want to get freaky with each other at Taylor’s hotel then so be it! 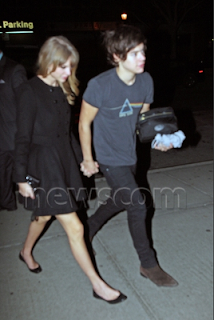 newscom.com
Maybe it is serious and everyone should just give him some space for once in his life, the media clearly ruined past relationships so maybe this one could work for him – but they do live on opposite sides of the world but that’s a different story.
Lets just take a moment to think about this question…imagine how beautiful and talented their children would be. That is all.