I thought I’d just touch upon a few stories in the news this week! So, let’s go.
The big one that has stuck out for me is the feud that Jake Bugg has started against One Direction. Unnecessary or not? Personally, I think he’s being so unnecessary and I would even say that if I wasn’t a One Direction fan because he’s being completely rude for no reason at all. I like Jake Bugg, or should I say liked. Once you realise someone has an awful personality it kind of puts you off, doesn’t it? He was reported to of said that he doesn’t understand why they are classed as a band and that they were there to just ‘look good’. Well, how rude. Then at the NME Awards (One Direction won Worst Band while Harry picked up Villain Of The Year) Jake suggested that they didn’t write their own songs and that he finds it hard to listen to music which doesn’t come from the ‘heart and soul’…alright, soppy. If he would look at who writes the songs he would discover they DO in fact have a part to play, assumptions, assumptions. Last week Niall and Louis responded to Jake Bugg on Twitter, Louis making a remark at how ‘indie’ he is, however, he is yet to respond…very indie of him. Let’s see where this goes, shall we? Maybe after One Direction finish their sold out world tour. 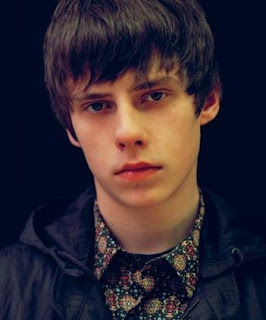 source
In other news it came to be announced that Taylor Swift and Ed Sheeran were a couple, GASP, SHOCK, AH. WHAT?! That was my reaction. Apparently they had been together last year and now they were too. Oh, blimey Taylor doesn’t mess about does she? I love the girl, I do, but maybe she should take a break…buy a puppy or something. Although, this hasn’t been confirmed as far as I know but I’m sure if it’s all true we will see them on the streets of New York like we did when everyone was speculating about her relationship with Harry Styles. That’s another thing, Harry and Ed are best friends and it’s the same girl, ouch.
Katie Price is preggers with her new fiancée, bit quick isn’t it. I always used to like her when she was with Peter Andre  because she seemed fairly stable and decent, but she’s gone a bit cray cray since.
V Festival line up was announced this week and then the tickets went on sale. The line up is fairly good, Beyoncé is the headliner alongside Kings Of Leon (what have they even done lately?) so she will be drawing in a lot of fans who didn’t get tickets for her tour in the UK. But all in all the line up looks quite good! I’m sure it’d be a good weekend. 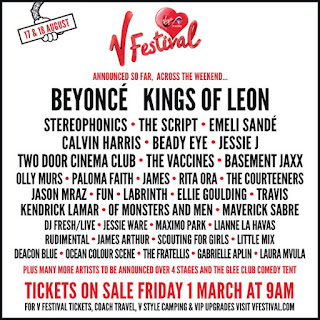